As I write this, the third season of Jashin-chan Dropkick (AKA Dropkick on My Devil!) is airing, making this the only occasion I’ve written anything timely. That alone should say how highly I recommend this series. Comedies are hard to review, as the verdict usually boils down to whether they made the reviewer laugh, so I’ll get this out of the way now: Jashin-chan is hilarious and if you enjoy absurdist, high-energy comedies like Excel Saga, Inferno Cop, or Adult Swim’s early 2000s lineup, you’ll probably love it.

The show is directed by Hikaru Satou, who’s done photography and storyboarding for a bunch of series you’ve probably heard of, but doesn’t seem to have been the main director for anything but Jashin-chan. My first guess was he also worked on fellow Nomad production Dokuro-chan, which is also violent slapstick about horrible people being horrible to each other, but that’s not the case either. Its source is a webcomic by Yukiwo, which is where its experimental nature begins; Jashin-chan isn’t a straight adaptation, instead doing a cold open as if the audience is already familiar with the cast and premise. If you didn’t pay attention to the OP, that’s on you.

In short, Jashin is a devil summoned by Yurine, who wanted to try out a spell she found in a grimoire bought on a whim from a used book store. Because she doesn’t have the companion volumes, Yurine can’t dismiss Jashin, who’s trapped on Earth until Yurine dies. It’s a great setup for Looney Tunes-style antagonistic comedy, which the series heavily plays to, with Yurine fighting off Jashin’s murder attempts with various weapons and torture devices she buys online, like Wile E. Coyote ordering the latest Acme product. The cast is rounded out with Jashin’s best (and only) friend Medusa, the tomboyish Minos, eternally starving former angel Pekola, and Hatsune Miku for some reason. Every character is voiced with charm and personality to spare, though Aina Suzuki steals the show as Jashin, who’s rendered with manic enthusiasm that veers from joyous self-satisfaction to demented panic from second to second as her fortunes dramatically reverse. The animation and writing play to these strengths by exaggerating Jashin’s movement and expressions and giving her plenty of chances to play off the other characters as well as herself (the first episode of season 2 takes this to the logical extreme by consisting mostly of various facets of Jashin’s mind debating what to buy for dinner).

The other characters have their moments, particularly Pekola, who has to live in a cardboard box in the park due to not having any Japanese ID, but when I think of the best, most memorable scenes, they’re all dominated by Jashin. This is largely due to her being thoroughly, relentlessly awful. She wastes so much of Medusa’s money on gambling, she refers to her as ATM, which throughout the series morphs into various backronyms like All To Myself. In one of the highlights of season 1, Jashin, sent by Yurine to deliver food to Pekola, instead gets drunk, destroys Pekola’s house, vomits on it, and passes out in the vomit. She’s that rare type of character who’s abjectly pathetic and completely deserves it.

As it goes on, the series introduces more meta twists on its own running jokes. Scene transitions feature the Baphomet-like character Devil A, who at first seems to simply be a mascot character, but is sometimes caught off guard or misses his cue. The most extreme example is the clip show episode, which comes at the end of season 2 and features clips only tenuously connected to the narration. After a confused, fumbling attempt at summarizing the show thus far, the characters give up and let Jashin sing for a full ten minutes. Like the later episodes of Excel Saga, it shouldn’t be funny yet succeeds anyway through sheer commitment. That’s how a lot of the series is, and it unfortunately loses quite a bit in the description; a lesser show would have fumbled many of Jashin-chan’s setups, to which anyone who’s seen both it and Dokuro-chan can attest. My favorite instance of over-commitment to a joke is the parade of angels that shows up throughout. First Poporon tries to assassinate Pekola and take her place in the angelic hierarchy, only to lose her halo and become trapped on Earth. Then Pino tries to assassinate them both, only to lose her halo and become trapped on Earth. Then their supervisor, Lierre, shows up trying to figure out why everyone keeps going missing. I can only imagine that by the time season 3 is done, God will somehow have become stuck on Earth too.

I didn’t intend for this review to become a recitation of my favorite punchlines, but I already said everything important in the first paragraph. The show does start off a bit slow, with an extended scene of Jashin trying to take more than her fair share of meat from a hot pot. But it quickly picks up and hits a consistent level of quality by the first season’s halfway point. From there on it’s great, with its best moments rivaling Excel Saga in both strangeness and hilarity. Even the regular cast doubling in size doesn’t slow it down due to how well-realized each character is. They all serve a clear purpose and have defined relationships that drive the comedy in directions beyond Jashin screwing up and being punished for it. And even the latter type of joke has plenty of highlights, such as Jashin’s gambling addiction growing so strong that it creates a time loop of her endlessly losing all her money on the same slot machine.

If you don’t believe me, just give it a shot and watch an episode. The show has little enough continuity that it doesn’t especially matter which one. I recommend season 1 episode 6, in which a cooking accident sends Jashin back in time to meet her past self. And if you like it, you’ll soon have three seasons to check out. 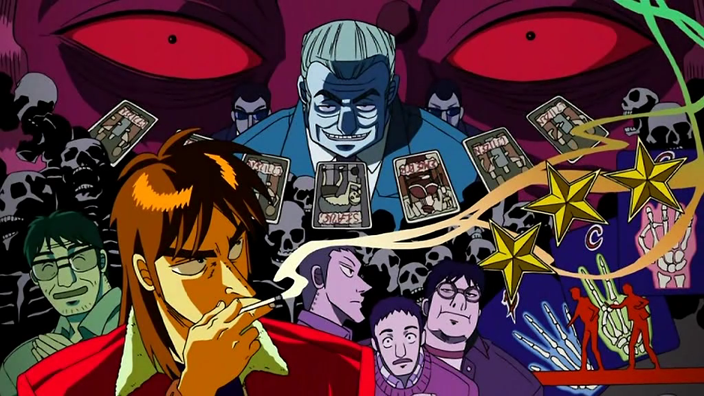