Fanservice.  We’ve come to expect it as a kind of standard in today’s anime.  Not a season goes by without one or two titles explicitly shouting “Yarr, here be boobies!” and then the market being flooded with highly detailed resin cast models in an attempt to make your 2D waifu 3D.  And boy do we like to bemoan the fact it creeps into everything.  Half of the shonen offerings pushed the titillation to the forefront and make it a feature rather than a gag.  And then young men’s manga has always had a virtual buffet of babes to be slobbered over by a dopey hero.  And I’m not going to lie; it’s been this way for a long time.

I’m no prude.  I’m not going to sit here and put forth the case that fake women have to change their dress, habits and whatnot to toe some moral line.  I too enjoy the female form in Japanese animation, especially when attached to an interesting and exciting character.  I just have qualifiers now of days, which I’ll talk about later.  No, back in the day I remember enjoying anime heroines, video game heroines and the like.  I had a poster of Faye Valentine displayed in my college bedroom that would easily be a Sports Illustrated model in another young man’s abode.  I had some models of my own, figurines, an opinion on who in an anime was cute and why.  In short, anime girls look good, so what exactly is the problem with them?

Short answer is nothing.  They’re not real and no one is getting hurt other than the warping of a few attitudes.  For the long answer one needs to look at the history of sexuality as a device in manga and anime.  That road begins at the anime pioneer Go Nagai.  He is known best for introducing ridable mecha, women main characters in shonen manga, and the ecchi genre.  Before his title Harenchi Gakuen, there wasn’t much room for sexiness in manga.  He wanted to do a series that portrayed a rebuttal to the Japanese idea of shame when it comes to sexuality.  Now ultimately the series was finished after about two and a half years but it left a mark.  Sales of the (then) new Shonen Jump took off thanks in part to their new and sexy funny comics.  And as tends to happen in editing circles in Japan, once the waters are tested everyone tries to make their funny sexy boy’s comic.  Meanwhile Go Nagai became the go-to guy for new ideas and pushed the boundaries of what could be put into comics for years.  His works Cutey Honey, Violence Jack, Devilman, Keikko Kamen put more and more pressure freedom to express both violence and sexuality in comics.  Be it something high minded, or lewd for lewd sake, the fact that it can be presented at all is thanks to the early pioneers.

But in Japan, culture has you respect those who came before a whole lot more.  Things tend to get stuck in a rut.  Let’s take the time machine up to the 80s.  1988 Gunbuster is produced by Gainax.  This is notable for two things, a revival of many tropes and homages to the great anime of the 70s and bouncing breasts.  Now anime wasn’t a stranger to sexuality at this point.  You couldn’t make a Lupin The 3rd anime and deny the raw sexuality of Fujiko Mine.  But with a few more frames of animation focusing on our young heroines busts sent ripples around the anime at the time and became kind of a signature move of the studio.  Hideki Anno said of Neon Genesis Evangelion before its release “every episode (will have) something for the fans to drool over.”  Now remember, my own thoughts on that series aside, NGE is supposed to be the crossroads of anime.  Where our “infantile” love of the goofy school-day melded with the violence of a slick mech fight was given some sort of intellectual hubbub and depth.  It seems we couldn’t take our high minded concepts without some T&A having some starring roles.  But of course the series is a hit and of course when something successful happens in an entertainment industry to that degree lessons are learned.  Sometimes the lesson is that anime set for teens can have some range and maturity to its subject matter.  Sometimes the lesson is to try and strike a balance of ideas when making a series.

But the lesson going forward from Gainax’s success seemed to be make sure sex appeal is a big part of your product, no matter what you’re selling.  For years after NGE was over figurines and artwork of the heroines of the series continued to dominate collectors markets.  Of course with the perpetuation of the series to this day has continually meant Rei and Asuka crop up just about everywhere.  This also means that just about every show that has been made for teens with an “edge” has had some prime waifu bait just hanging around.  As it started there it fell into other genres and styles so you’re left with just about every show having fanservice as a staple, rather than a bonus.  It’s oversaturated to a point where it’s no longer service, its suffering.  And it wasn’t that way when it stayed in the realm of shonen fare, but when it started to bleed over into other genres it’s started to make some rather strange marks on series that never needed this kind of boost in the first place.

I guess part of the problem is as anime fans age they understand that most anime isn’t targeted at them.  And let’s be completely honest here anime tried to make shows that would appeal to a global market but the way it was handled it had never become more than niche.  As such when “Thinly disguised harem anime #2437” showed up time and again in the 2000’s, many people who loved anime up to that point got tired of it and moved on.  For the old guard who stayed it was a minefield of finding something you really enjoyed, but it was bolstered up with teenagers frolicking about in lewd ways that made you rush out to the porch to make them get off your lawn only to break your hip on the way.  The western licensors continued to bring over more anime to the English speaking audiences, but with more and more buying power being lost by alienating older fans they had to bolster everything else aimed at teens.  That meant waifus, waifus galore.  And they were snapped up, changing the landscape of anime fandom in the west to this very day.  And then those people grew up, and somewhere along the way we started delving into fanservice featuring differing fetishes then younger and younger characters until we get things like (ugh) Dragon Maid.

So what do we do about it?  There is certainly a place for sexuality in animation but the problem we have is an overabundance to a breaking point.  It’s hard to make new anime fans when you have to wade through a sea of scantily clad pre-teens to get to the best titles, or even the titles without said pre-teens.  Well, the easiest thing for the self is to be more discerning about what you watch.  Let’s face it, we’re all told that anime is so good we have to keep watching, spread the word, take in the titles because as a niche market it’s a little bubble and easy to pop.  I know several people who follow so many series they don’t even like because they’re creeped out with part of the subject matter.  But they claim they have to suffer through it, because it’s a popular series and if you make your stand with it then more good stuff will come.  But that’s not how it works.  It just leads them to make even more series just like the one that’s creeping you out.  You have to know when to get out of a series.  Sure, sometimes it seems like all that happens every new season is a little creepy, however it is really diverse and the stuff that isn’t always featured in the western fandoms have what is right for you.  Don’t settle.  The moment you feel a series is wrong, don’t watch it just because you started.  Find something else to enjoy.

Something I’d like to see is more female characters that are meant to be the sex symbols of the series that are above the range of high school range and under.  Quick question, in current anime is there a female lead that is both a sex symbol and above the age of seventeen?  Now hard mode, don’t include things based on current video games.  Extra hard mode, can’t be a property that has been rebooted from before the turn of the century.  (And no, don’t make a “But they’re really 3000 in human years” character your example.)  I’ve sat on this question for a bit and can’t really come up with anything (Maybe Black Lagoon… or is that too old now?).  Every time I thought of someone, I realized it had something to do with Persona 5.  Most anime is focused towards teenagers.  And that means yeah, such series should and will have teenage fantasy fanservice.  From the shonen with the accidental panty flash to the shojo with the two gorgeous men feeding each other strawberry parfaits.  But over the years the other manga and anime markets are in a rut of everything being in high school.  Seinen manga is aimed at middle aged men and tend to have a broad range of subjects.  Berserk, Gunsmith Cats, 20th Century Boys, Monster, Akira, Hellsing, Golgo 13 and more are in this category.  Stories with violence, mature themes, mature thoughts and more.  But something happens when you decide to add a heaping helping of sex appeal.  Everyone heads right back to high school for the likes of Prison School, Taboo Tattoo, B Gata H Kei, Elfen Lied.  We get it, high school is really, really important to Japanese culture but sometime recent we decided that it’s the be all, end all to the majority of greenlit manga works that get an anime adaptation.  Which leads to our next idea for fixing fanservice, diversify your manga reading.  For a more diverse age range, relationship types, and even sexualities, read lots of different stories in lots of different styles.  Go off script from the publishers because they do monitor most popular websites for reading manga to see what will genuinely sell.  And when those different stories do sell HERE COME THE GUILT FREE ANIME TIDDIES!  we go back to the rich varieties of stories we had coming to the west again.

Dean the Adequate has just used a great many words to tell you to “Watch better stuff” but he doesn’t blame you.  He blames himself for not being able to support that better stuff himself.  Look you can’t eat DVDs, especially when the cost continues to try and reflect the way they price anime sets in Japan (Spoiler alert: crazy huge prices).  But it’s OK, we live in the modern age, where you can get every anime brought to the west for the low sum of about $80-120 a month for every streaming direct and indirect service that has anime.  Double dip for Amazon.  Congrats anime fandom, we played ourselves. 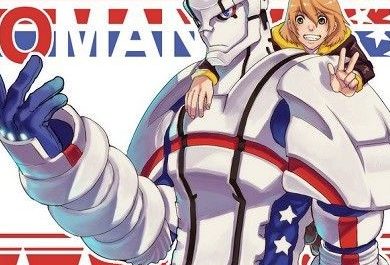