Before we begin the review proper, let me address the elephant in the room.  This anime does indeed echo the themes of the very popular anime and manga series Attack on Titan.  Both have mysterious world ending events involving powerful supernatural seeming creatures, both have protagonists who use these creatures powers, both involve the preservation of life within walled havens of humanity, and both are set during industrial age style settings.  It’s not very surprising.  Studio Wit, the anime production company, produced the Attack on Titan anime.  This happens a lot when new companies try to carve themselves some new intellectual properties, they’re going to use elements that made them successful.  So I won’t fault them for ripping off a successful idea.  But there is indeed fault, but that’s to be discussed later.

For the uninitiated, Kabaneri of the Iron Fortress is about a world in which a virus has created zombies called Kabane.  These creatures have durable iron cages over their hearts.  The only way to really destroy these creatures is to destroy the heart.  Armed forces use melee weapons or steam pressure driven guns to drive the creatures back, and humanity hides in huge walled cities known as Stations.  The stations are connected by a series of large armored trains.  It is in this setting we meet the steamsmithIkoma.  Years ago his sister was killed during a Kabane attack in his home station, but he dreams of eliminating all the Kabane and returning the world to humanity.  We begin our series showing a bit about the world, and then proceed to destroy the city in a Kabane attack in which Ikoma is bitten.  But he has prepared for this moment, he’s a really smart engineer who has studied Kabane since that fateful day, and he was able to stop himself from transforming completely.  He has a Kabane’s body and powers but still his own mind. He is known as a Kabaneri. He jumps aboard the train Kotetsujo as the survivors make their way to the capitol in a last bid for survival.

This sounds pretty good on paper.  There is a lot to like about this series.  The world building makes you interested to learn more, there are solid action scenes as one expects from this studio, and the background artwork and technology designs are such a different blend of steampunk it makes the aesthetic fresh instead of tiresome.  When the Kotetsujo fires up, you have a real sense of power and weight behind it.  As the Kabane attack, there are all these little scenes that remind us how devastating these attacks are and how brutal every decision must be.

But as pretty as the backgrounds are, as interesting and weighty the fights might get what any series must lean on are story, character and above all threat.  This series lacks in every department.

The story is a cliché framework that exists to hang our simplified characters on.  It’s a flight against danger that seemingly drops all danger from time to time, only to ramp it right back up in an attempt to be dramatic.  Events don’t happen naturally at all, and the only way the story progresses is if either a brilliant world breaking idea is hatched, someone who is presumed dead shows back up, or someone invokes that old anime cliché “Add more guts”.   About a third of the anime the only clear problem is the threat of Kabane attack.  But out of nowhere one character’s backstory shows up in such a ham fisted manner it obliterates not only any threat from the established environment, but gives us a feeling that this entire series didn’t matter because ultimately whatever hope we garner through our character’s determination is smashed before us because we can’t guarantee a second season is coming.  I don’t mind series where evil plans come to fruition, but at least have our protagonists gain something beyond keeping the immediate character roster safe for now.  A series in which we’re promised world changing events, but the fate of every Station we come across is wave after wave of Kabane destroying it with merely token survivors and resistance.

The characters, oh man these characters.  Ikoma is a capable protagonist who is kind to his friends and deadly cold to his enemies.  His only real defining trait is tenacity, and while you need that in a hero that’s the only part of him that feels like there is any weight to it.  When we see Ikoma joking with his friends or coming up with new devices they are fleeting moments quickly replaced with determination, anger or both.  Mumei is a very capable Kabaneri who is linked to the series villain in one of those twisted deal with the devil backstories.  Every moment this series molds her into being a tsundere badass of destruction.  Then (of course) she’s turned into an indecisive pudding whenever there is conflict between the two men in her life.  Biba is our series villain who has only one clear motivation: destroy the Shogunate.  However, the reason he has for this is pitiful, misguided, and severely hamstringed by the fact his goal of destruction runs contrary to his focus on destroying the Kabane.  If this were a part of an unethical plan to free the world, then there might be a reason for the animosity between Biba and Ikoma’s ideals.  The real reason these two hate each other is the fate of Mumei, is she a weapon or is she a victim?  She’s both.  But it’s anime so it doesn’t matter.

As for the supporting cast… I haven’t seen a supporting cast look this diverse and then just pushed aside for so long.  Ayame is the noblewoman whose primary service to the story is to use her nobility and cliché speeches about trust and honor and whatnot to give other characters time to either fight or move the train.  The other warriors on the train are either stoic and accepting of the Kabaneri, or Ayame’s bodyguard Kurusu who is also stoic, but not accepting at first.  Ikoma’s fellow steamsmiths make the journey as well, but they are either regulated to making sure there are tense moments of engineering or act as a human chorus.  Well except Ikoma’s best friend Takumi who does bring out some of Ikoma’s more human side.  So he’s pretty much turned into fodder when there needs to be an extra dash of pathos and anger.

In a show like this you need to keep the pressure on.  The threat of the Kabane is like any other zombie based horde.  Humanity has a pretty good handle on things until human error here and there makes the threat overwhelming.  But early on the threat is mitigated almost entirely through the technology we learn they already have.  Their guns are powered by steam, I assume kind of like an air powered gun like a paintball or BB gun.  Ikoma has been indevelopment of a really devastating type of steam gun that can pierce a Kabane’s heart.  Now, unless this heart iron is made of something significantly harder than iron it would be real easy to harness the power of steam pressure to puncture these cage hearts.  They used to make air powered rifles that could take out large game around the time period depicted in this series, so why are these high powered rifles ineffective?  Later in the series we learn that they’re experimenting with adding gunpowder to these things in order to make them more effective… because moist steam environments will work with gunpowder really great.  They’re already using gunpowder as a kind of suicide device for when you are bitten by a Kabane, and the damage they do rips apart a torso.  There must be more these suicide gunpowder bags can be used for than adding the drama of a mother being forced to explode her own child.  Finally we learn that the most powerful swords are actually forged from fragments or entire sets of the metal wrapped around a Kabane’s heart.  If it can be refined and forged by human means, surely the material could be replicated by the technology at the time.  And at the rate Kabane attack there should be loads of the raw material on hand for every soldier to have not only a blade made of the stuff, but bullets as well.

There is no reason humanity should be this far behind in this series.  With Ikoma’s own innovations turned into the average, it’s hard to perceive the Kabane as a threat beyond about halfway through the series.  And with no external threat, it’s hard for the human moments in this series to hold any weight when the only real reason humanity is threatened at all is the fact Biba had father issues.

The elements are here to make something wonderful, but the decision to appeal to the masses made this series just another shonencashgrab.  No matter how beautiful the background, no matter how cool the trains look, no matter how fluid and great the action is: a series with no heart, character or teeth cannot stand. 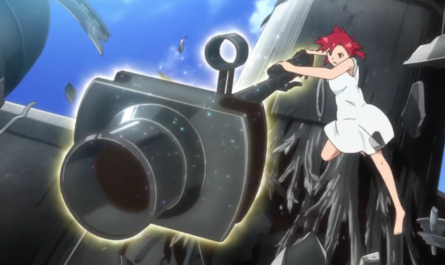