For our next entry in my study of Tominology, I’m going to look at an OVA series which at times defies description and is simultaneously so bad it’s good. I, of course, am talking about Garzey’s Wing.

Trying to explain Garzey’s Wing leads to the great question, “where do I start”?

Well, let’s start with this interesting factoid. Garzey’s Wing is an adaptation. I am not joking, and I can explain. Aside from creating the Gundam Metaseries, Tomino is widely prolific, not only as an animator and director, but also as a light novel author and a lyricist (he is credited as Rin Iogi, for his lyrical compositions). While most of Tomino’s novels are about Gundam, the other major series he has created is The Byston Well Saga. Spanning 19 novels over 14 years, the series is focused on the titular Byston Well, a kind of sword and sorcery land, with mysticism and giant robots. And before you can make the obvious Escaflowne joke, this metaseries was created in 1983, 13 years before Escaflowne was a thing. Garzey’s Wing was the third series within the metaseries, and whose four volumes were published between 1995 and 1997. It wound up be the last new novels for the series. Byston Well itself has also featured in other Tomino anime properties such as Aura Battler Dunbine (1983-84), and The Wings of Rean (2005).

As for Tomino himself, at this point, Tomino’s career wasn’t doing so hot. After Gundam F91 failed to excite people, and Victory Gundam was more depressing than Evangelion and Bokurano combined, Tomino was probably not in the best of health. I say probably, because very few interviews with him have been translated and only three of Tomino’s novels have been translated into English, none of them in the Byston Well series. So, the information I have is insanely limited. What I also know is the series was not produced by Sunrise, instead it was produced by J.C. Staff, the studio behind Slayers and Revolutionary Girl Utena. Their track record on OVAs isn’t great, with the likes of Bounty Dog, Tokyo Revelation and Voltage Fighter Gowcaizer on their credits.

The first episode starts off with in a breakneck pace where our protagonist Chris is being chastised by his girlfriend (I think). He speeds off on his motorcycle, when suddenly his unmentioned necklace starts rattling and then he gets kidnapped by a giant space-duck. But his body doesn’t get kidnapped, only his spirit and if you’re lost, I don’t blame you. This is one of those series which has the telltale marks of being heavily cut down, and not in the “making the material better” way, I mean in the “chunks of the story are cut out like a ransom note, then what remains is stitched together” way.

Well, I guess I’m not high.

He gets transported to Byston’s Well, where he’s naked, dealing with a shrieking fairy, has wings on his heels and he’s flying. I can only wish I was on something while writing this synopsis, but I’m not. Suddenly a group of peasants surround him, saying he’s the chosen one, and their spiritual leader (I think) summoned Chris through a bell, but this would mean they would know Chris is Garzey’s Wing, and what happened if Garzey’s Wing wasn’t summoned by the bell ringing, and I’m lost again.

Bottom line, Chris is the chosen one, to lead a group of slaves to freedom. That’s it. Why the bad guys are the bad guys isn’t explained at all. Then after a brief, confusing action scene, we have an exposition scene, where things make less sense. So, the prince of the evil kingdom thinks the slaves (dubbed Metomeus) contacted Garzey’s Wing because it’s a leap year. Stop right there, I’m now completely lost. How do they know that? How is contacting mystical entity on a leap year meaningful to anything? And what the point of all this? I’m only ten minutes in, and I’m losing my mind.

After another fight scene reminiscent of a D&D encounter, Chris gets into an argument with the fairy. This led into another big problem with the series, the constant new terminology thrown in at every sentence. Doragaroll, Gabajuju, Metomeus, and Ashigaba are several terms not defined for the audience, either in subtitles or through exposition. This really is like trying to explain TTRPGs to someone who has never played them.

One of the frames of one of the worst animated sequences in history.

Around the 15-minute mark of episode one, we finally get some exposition of what Garzey’s Wing and Byston Well are. Garzey’s Wing is apparently a legend (even though it happens in story, so that’s questionable), and Byston Well is a world created by aura. What is aura? To be honest, a Google search said it was something to do with spiritualism, kind of like a soul. But this is also confusing. If this is a world created by people’s souls, shouldn’t these disappearance by giant geese be an everyday occurrence? How do they get back to Earth? If Chris tears off the necklace, can his soul get back to his body? Why are bruises appearing on his real body, instead of only on his soul’s body? There are more questions which I don’t think will be answered. While the concept of communicating between your soul in one world and your human body in the real world is an interesting and remarkable story concept, it’s just not executed with any visual panache.

Man, do I wish I was watching Saint Seiya, right now.

Eventually, the Real World Chris tells Byston Well Chris to make gunpowder and explosives, and what followed what an uninteresting action scene noticeable for two things. One, really bad animation for the evil side’s soldiers moving, and two, Chris’ gunpowder bags apparently act like C-4s because they explode like nobody’s business, which brings unintentional comedy. Even though the swordfight between Chris and the evil prince isn’t bad at all, and I was unabashedly into it, it was undone by abysmal animation. So, after a giant rockpile falls (and nobody dies), Chris gets a new sword. And thus, episode one ends, thank whatever.

This fight scene was the only part where there was life in this OVA.

Episode two begins with a mind-bending pace with Chris being bad at riding a horse. After some “comedy” involving Chris and his horse mishaps (which lands with the consistency of a thud), we finally get some exposition about what is going on. The bad guys want to place a “Doragorol at Gabajuju”, I have zero idea what they’re talking about, so I’m guessing they’re putting a monster to stop the people escaping. I think.

The rival, had they been fully fleshed out, would have made an interesting counterpart.

It’s around the 8-minute point of this second episode that I realized I’ve lost the plot; nothing makes any sense whatsoever. Our rival character lands from riding a pterodactyl, the next cut he’s sitting down, talking about a plan. To say this was abrupt is an understatement. After this, Chris’ group is fighting monsters, and then the monsters decide to form a hydra. Which is instantly taken out by a masked swordsman. All during this, the rival captures their spiritual leader, for reasons completely unknown.

The day is saved (yawn), and we meet this masked swordsman. Now, for the sake of integrity, I’m watched this subbed, because while the dub is hilariously bad, I was convinced it would a bit better in its original Japanese. However this masked swordsman was so funny it required a comment. The voice of the masked swordsman in the English dub is the horrifying offspring of Kermit the Frog and John Madden. So, he’ll sing to us about the Rainbow Connection, then explain how we need the run to set up the pass.

So, then we cut back to Chris on Earth, and apparently he isn’t feeling well. I didn’t know that your body and soul separating would mean you die of Ali MacGraw disease.

The Byston Well Chris prepares them to create guns (I think). They make mentions to something called Bunzado, but like everything else this is not explained. This insanity of a second episode ends with Chris falling off a horse, a giant confusing battle, and Kermit Madden overlooking everything.

Third episode, this battle happens for five seconds of screen time and it’s over. Okay, I know there have been time shenanigans going on, but this is ridiculous. After more incomprehensible exposition, we cut back to the real world and find Chris is sick for 30 seconds, and then back to Byston’s Well.

Chris is on a wagon, and asking why the peasants don’t like the fairy. Then he asks why the spiritual leader doesn’t want to be separated, and they replied to summon Garzey’s Wing (which according to everything I’ve seen, has the stability of a dial-up line.)

After yet another confusing, boring action sequence, (confusing because you have no idea what is going on, and boring despite that action sequences involving a lot of gunpowder shouldn’t be boring.) There’s yet another scene with Chris and the spiritualist talking telepathically, and this should be interesting, but it’s not portrayed as such, as always.

Cutting back to Chris in the real world, the Ali MacGraw disease is getting worse. How? Why? Considering everything else, do you think you’re getting an answer?

So, we have this final battle, which is still very dull, and they defeat the bad guys! Then we cut back to the real world, with the final scene to end this insanity. Chris and Rumiko are riding his bike when suddenly, Garzey’s Wing takes the motorcycle and makes it fly with both on it.

This is just stupid.

This OVA is a train wreck. No surprise there. Let’s list off some gripes. The exposition is nonsensical and bordering on terrible. The dialogue would make Ed Wood proud, and what few promising ideas are squashed by the completely insanity of what we’re watching. The animation is below average. It didn’t look great in 1996, and it still looks terrible now. Even though the Japanese cast tries hard, this is still a terrible OVA which bears marks of exposition cut out for time. Could a 5-part Garzey’s Wing OVA series have fleshed out the world, and made everything make some modicum of sense? Probably, but you never really know. Even though there are promising ideas in here, they’re not executed in any way which works dramatically. 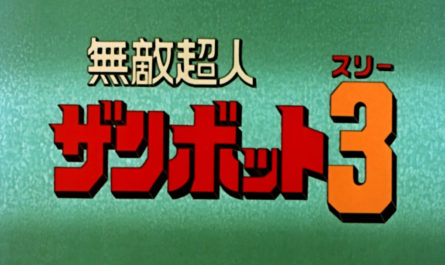